Despite hundreds of martyrs who paid their lives in the 58 days of resistance against the Turkish
occupation forces and the Syrian military fractions which affiliated with Turkey namely “the
Syrian National Army” who have a radical Islamic ideology.

Despite the resistance made by the
Kurdish people generally, and the children of “Çiyayê kurmênc”, Afrin’s young boys and girls
particularly, despite all that the Afrin region was occupied.

This occupation was a result of some major countries interests intersected with Turkey under the
silence of the International Coalition Forces for fighting ISIS in Syria, a result of international
community inaction which played a big role in encouraging Turkey to increase its oppression
and abuse against the people of Afrin region.

Turkey and its armed factions, its affiliated forces
are seizing Afrin since March 18, 2018, practicing all kinds of violence and crimes which
opposes humanitarian values and principles, including killing on purpose, raping, forcibly
seizing of Kurds’ properties at gunpoint, and expelling the Kurds from their homes, housing
instead the families of the military factions who have been displaced from various Syrian
regions. The crimes including the destruction of the environment, from burning the forests
scattered on Afrin mountains to cutting fruitful trees, especially olive trees which Afrin region is
famous for, to the destruction of archaeological sites, looting and robbing their contents, in
addition to the systematic demographic changing policy practiced by Turkey and its allies. All
these reasons make it necessary to convey to the relevant international organizations all these
inhumane facts and violations that contradicts all the international conventions, covenants and
charters on human rights which reached to the point of war of extermination and ethnic
cleansing.

For conveying these crimes, we, a group of Afrin people in the diaspora, have
established the “ The National Initiative for Afrin”

The National Initiative for Afrin:
Is a civil, voluntary, independent, and non-profit initiative. The initiative aims firstly at
organizing the efforts of Afrin region people abroad, and secondly organizing the power of
national Kurds and Syrians to be a wide and transparent arena for all those who want to work for
the Afrin issue. To work for returning its original inhabitants back who were forcibly displaced,
return of course under the international guarantees and legal safeguards. To expose the violations
of the Turkish government and its affiliated forces in all the possible ways diplomatically,
informationally in media, legally and publicly.

The initiative is not a substitution for any other political, institutional, platformer or
organizational activities that are working and struggling for the Afrin issue. Rather the Initiative
aims to gather and coordinate those Afrin issue efforts to create louder voice and a stronger
presence in the international, political, and humanitarian fields.

The initiative agenda and objects:

1. The initiative will continue until the end of the occupation and the abolishment of all its
consequences.

2. Exposing the crimes and the violations of Turkish occupation and its loyal factions in the
Afrin region and stopping the demographic changing and making it a public issue.

3. Documenting and archiving all the violations and crimes which have been committed by
the Turkish occupation and its military groups against the indigenous people especially
women, children, and elderly people, against the religious minorities “Yazidis, Alwites,
and Christians” and covey all this to the International and Human Rights organizations
and working to bring to justice the perpetrators of war-crimes, genocide and ethnic
crimes which committed in Afrin.

4. Offering help and support to those who are forcibly displaced from the Afrin region
wherever they are “as much as possible” and assuring them a dignified and safe return
based on international safeguard.

5. Working to send the international and humanitarian organization and the neutral media to
the Afrin region and the Shahba region to reveal the truth and recognize the situation
closely.

6. Working to coordinate all the efforts which are done for the Afrin issue and its people,
and coordinate with different civic activities in other Syrian regions which have similar
situations to Afrin.

7. Confronting the Turkish media and other global, regional, and local platforms that
support the Turkish occupation, legitimize all the crimes committed in the Afrin region
by the military groups which Turkey supports, or beautify their image. 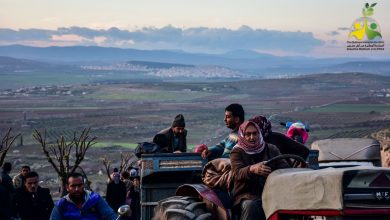 On the fourth black anniversary, Efrin gathers us