On the fourth black anniversary, Efrin gathers us
The fourth black anniversary of the occupation of The Efrin region “Ciyaye Kurmenc” comes amid international political chaos, military tension, and a third world warshadow looming over between the two camps who are trying to expand their influence,spread their policies andinternational power whichtakes place at the expense of the occupied people who pay the warbills with their lives, their suffering, and their displacement. It is a repetition ofthe native Efrin people’sdisplacement towards their bitter alienation on March 18, 2018, as they climbed the “Ahlam Mountain/Dream Mountain” after the nightmare of the Turkish occupationwith its mercenaries andinternational terrorist organizations.The ugly nightmares took the place of their dreams.Insteadof climbing towards their free future they climbed a setback and a descent into the catastrophe of the occupation.
Four hard years have passed and “Ciyaye Kurmenc” is under occupation, violations, andall types of inhumane crimes which, according to many international reports, amount to war crimes. These crimes which committed by the Turkish occupation and its mercenaries with the aim of changing the demographic structure and restructure it on a base of Turkification and Arabizationscale.
Four disastrous years, and political Islam is still represented by the Muslim Brotherhood organizations,supported by organizations of some 48 Palestinian Arabs who mourned the settlement that took place on their land, but on other side theybecome victimizers and support settlement projects in the Efrin region and its villages. All is supported financially from brotherhood organization in Qatar and Kuwait, who are partners for the new Ottomans expansion on other courtiers and regions. Four years of kidnapping, raping, disappearing, assaulting on religious sanctities and minorities, and cultural and environmental genocide against Efrin and its authenticity. Four years and the native peopleEfrin are looking forward to their returnto Efrin, free and pure Efrin from Turkish occupation, and its tails.
We in the National Initiative for Afrin, live this catastrophic memory, reiterate, and affirm that Efrin will not be occupied, and its land will not remain a subject to Turkification and Arabization, no matter how long or short the time, and its native people will return to it freely and with dignity. As its original Kurdish people resisted the attempts of national fusion and all policies which Al’Baath regime practiced for more than half a century, will resist bravely the Turkishoccupation and its expansion projects which will break on the rocks of the Efrin Kurds’ resistance.
We are aware of the complexities of the political equationwhich are linked to Efrin issue, and the internationalcircumstances and benefits region that impede its liberation from occupation,but we clarify in this context the ugly truth that confirms the international political hypocrisy that was silent on the occupation ofEfrin and is still silent on all violations and war crimes committed in Efrin.The international forces that gave the green light to the Turkish army to invade Afrin and occupy it with cheap bargains, all this have further complicated the Syrian scene and perpetuated its catastrophe, by turning the region into a terrorist mire that will contaminate countries and region and European countries with the projects of Brotherhood political Islam,which will harm everyone without exception, and will transform the political deals with Turkey to serious political and security defeats for those countries that believe Turkey has established a safe zone in Afrin.
We, in the National Initiative for Afrin, affirm our commitment to our civil struggle that asks forgoodness and freedom for all nations of the world. In the same context, we have not lost hope in the free world, and the peoples yearning for democracy and freedom, which can change political equations. People are the fixed element, and international interests are the variable in all political equation which varies according to political conditions. Today these conditions support the Turkish occupation state and its aggressive war against the Kurds and the occupation of Efrin, GirêSpî and SerêKaniyê. These political conditions are constantly changing, and one day will come when the people of Afrin can return to their free land.
The National Initiative for Afrin emphasizes once again its constants in uniting Efrin people, especially in the diaspora, and gathering all efforts for the benefit of Efrin and its people and uniting all Syrian and Kurdish democratic power to be together for Efrin.
The National Initiative for Efrin
18.03.2022
March 18, 2022
54
Facebook Twitter Skype Messenger Messenger WhatsApp Telegram Viber Share via Email Print 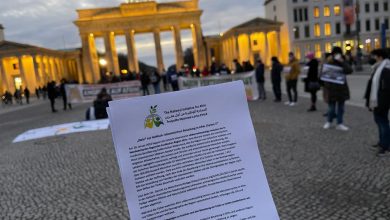 The founding statement of The National Initiative for Afrin